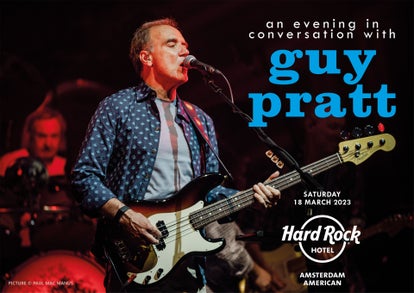 Sold out
Sold out

An evening in conversation with Guy Pratt at the intimate setting of the ‘Mata Hide Away’ inside the Hard Rock Hotel Amsterdam American.

Why not combine the event with a night at the historic hotel. Check the official Hard Rock Hotel Amsterdam American site for details.

With a very limited availability of seats, tickets are limited to 2 (two) per person. Purchases over 2 (two) tickets will be cancelled.

Tickets are personalised and not transferable. If you are not able to make it, please contact us and I will cancel your purchase.

The personalised tickets and all necessary information will be send in the week prior to the event and should be brought to the venue.

Please keep your receipt and use the order number with any correspondence.

The venue is partly seated (unreserved) and partly standing.

I case of cancellation of the event you will receive a full refund.

World renowned Bassist, Composer, Comedian, Author and Podcaster, Guy is perhaps best known for his 35 year association with Pink Floyd, having played bass for them, David Gilmour, and currently Nick Mason’s Saucerful of Secrets, in which he shares lead vocals with Spandau Ballet’s Gary Kemp, with who he  co-hosts the No 1 Music Podcast, ‘The Rockonteurs.’

He has won a Grammy and received 2 Ivor Novello award nominations for his composing work in film and TV, having  composed and played on countless film and TV scores, including ‘The Road to El Dorado’ ‘Hackers’, ‘The Last Action Hero’, ‘Don Juan DeMarco’, ‘Johnny English’ (and Johnny English Reborn) ‘Still Crazy’ and ‘Spaced’. (Series 1 and 2)

His autobiography ‘My bass ands other Animals’ is a cult classic, still in print more than 15 years after publication, which stemmed from his successful one man comedy show of the same name, which Guy has performed all over the world.